Fanny Crosby has always been one of my favourite hymnists. She is

reported to have written the lyrics to over 8000 hymns and gospel songs in her lifetime. Because some publishers were hesitant to have so many hymns by one person in their hymnals, Crosby used nearly 200 pseudonyms during her career.

Crosby described her hymn-writing process: “It may seem a little old-fashioned, always to begin one’s work with prayer, but I never undertake a hymn without first asking the good Lord to be my inspiration.” Her capacity for work was incredible and often she would compose six or seven hymns a day. Her poems and hymns were composed entirely in her mind and she worked on as many as twelve hymns at once before dictating them.

I had never heard this particular hymn before, but thought the words still

rang true today. It was originally titled "Able to Deliver" in 1899. I kept

(but modernized) the verses as best I could, wrote a new chorus, and a fresh melody.

O troubled heart, be thou not afraid,

In the Lord thy God, let thy hope be stayed;

He will hear thy cry and will give thee aid,

Whate’er thy cross may be.

He is able still to deliver thee,

And His own right hand thy defense shall be:

He is able still to deliver thee,

Then be thou not afraid.

Let thy faith be strong and thy armor bright;

And more than conqu’ror be.

O troubled heart, when thy way is drear,

He will rescue thee and dispel thy fear;

In thy greatest need He is always near,

To Him all glory be.

We live in uncertain times, and true to the scriptures the end times are

full of strife and challenges, as mankind inflicts unspeakable atrocities on itself. Jesus said, “In this world you will have trouble, but I have overcome the world”.

We are not to live in fear, but in confidence, with our focus on His Goodness - He will deliver us! Our “job” in these troubled times is to be faithful with what He’s given us, and good ambassadors of His love and grace. We need to serve our Deliverer faithfully with all we’ve got, and brighten our corner of the Kingdom, until He takes us home to be with Him forever.

Anthony Packwood (guitars) and Carlin Lemon (organ) brought this song to life. Both have been with me since the start… Anthony convinced me to record in the first place, and co-produced my first album (Together) with me, He played lead guitar on two songs on my second album (To The World). Carlin has played on all three of my CD projects. Both are unbelievably talented men, and I’m privileged to have them join me on these projects. Dave Janssen (bass) and Phil Robertson played ALL the bass and drum tracks on this album. I am SO blessed to work with such talented people!

Rock Song of the Year

I included two Fanny Crosby hymns on this album, the other is

"Praise the Lord", which is a remake of her popular hymn 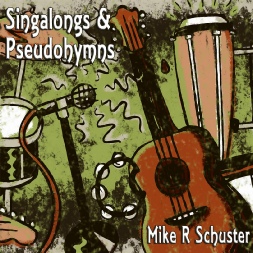 If you want more info on

any of these songs,

drop Mike a note at: